Hello to all! We’ve put a lot of time and effort into improving the scanning mechanism, the Windows agent and many other program components. This time we’ve also paid special attention to improvements requested by our users. Please bid welcome to version 3.6.0! 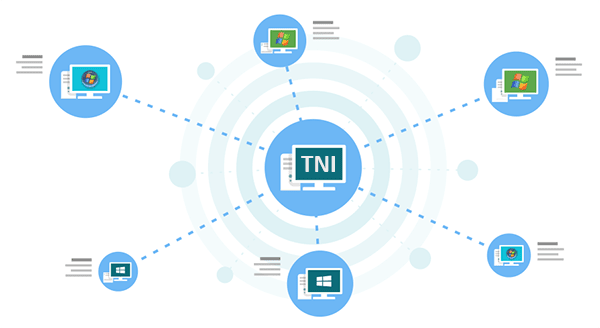 The TNI scanner underwent an in-depth tuning and refinement. We’ve completely rewritten the internal scanning mechanism: increased the stability of the whole process, expanded the network discovery mechanisms and significantly raised the scanning speed for medium and large networks. How events in the scanner are logged and how it interacts with Active Directory have been improved as well, with many other positive changes that will speed up the scanning process and make it more thorough and reliable. Scheduled scans will no longer be delayed because the scanner is busy with the previous task. They will start in the background exactly when you’ve planned!

We’ve added more features to the Windows agent. Yes, we mean tniwinagent.exe that’s used when scanning remote computers from the Scanner tab and can also be run manually to scan the computer. You may also be using this file as an automated resident agent. So what we’ve done for this new agent version is updated its own scanner, added more fields to be collected and improved the interaction with the SMB protocol. Lastly, now it supports the new FTP/FTPS and SFTP/SCP protocols. All this was done to obtain as complete and reliable information about Windows systems as possible.

You asked, we delivered

In each update we try to pay special attention to fixes and improvements based on your feedback and requests. In Total Network Inventory 3.6.0, these changes have affected many parts of the program: interface, reports, temporary files, compatibility with Total Software Deployment, other elements have been corrected and improved thanks to you! In addition, we’ve finally solved a number of issues that may arise when corrupted files are present in the storage and, by optimizing internal processes, heavily improved the stability of the application as a whole. After these changes, TNI becomes considerably faster and even more stable. Here is the full list of changes: PS: Our team is now working on creating a network map feature and improving the scanning of SNMP devices. Stay tuned for more updates!
2 Responses to “TNI 3.6.0: New scanner core and extended capabilities of the Windows agent”
Click here to cancel reply.